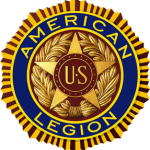 The American Legion was chartered and incorporated by Congress in 1919 as a patriotic veterans organization devoted to mutual helpfulness. It is the nation’s largest wartime veterans service organization, committed to mentoring youth and sponsorship of wholesome programs in our communities, advocating patriotism and honor, promoting strong national security, and continued devotion to our fellow service members and veterans.

The American Legion is a nonpartisan, not-for-profit organization with great political influence perpetuated by its grass-roots involvement in the legislation process from local districts to Capitol Hill. Legionnaires’ sense of obligation to community, state and nation drives an honest advocacy for veterans in Washington. The Legion stands behind the issues most important to the nation’s veterans community, backed by resolutions passed by volunteer leadership.

Shot down on March 4, 1945, over France while flying a one-man bomber.

He was listed as KIA on his 33rd mission.

John F Murphy, for whom Post 303 was named, was a 2nd Lieutenant in the Army Air Corps and was married to a Bonita Springs girl related to the Reahard Family, who donated the land for Post 303.

Like many patriotic Americans, he gave his all and his life in World War II, so that future generations may remain a free people.  Lt John F Murphy was killed in action on March 4, 1945, while flying a one-man Bomber during special flights in France.  He is therefore one our heroes and his name is immortalized with the The American Legion Post 303.

Learn More About Our History

View items for sale in our Ships Store!
VISIT THE SHIPS STORE PAGE

Important Information that you can use!
VISIT THE LINKS PAGE
Flag Retirement

The U.S. Flag code states that, “the flag, when it is in such condition that it is no longer a fitting emblem for display, should be destroyed in a dignified way, preferably by burning.” Thus, when a flag is torn and tattered beyond repair, it’s time for it to be retired.

Just drop off your tattered flag in the specially marked mailbox at the Post entry door.